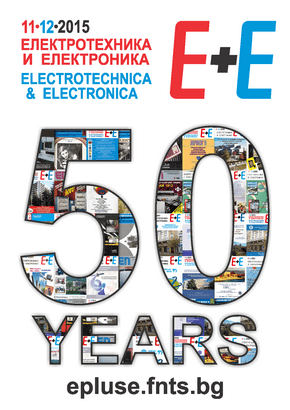 The journal was established under the name “Elektropromishlenost i Priborostroene” (“Electrical Industry and Instrumentation”) and was renamed to its current name in 1990. On December the 17th 2015 it celebrated its 50th anniversary with a commemorative meeting at the National House of Science and Technology in Sofia. The 50th anniversary of the journal E+E is a remarkable jubilee for the Bulgarian scientists and engineers working in the fields of electrical engineering, electronics, telecommunications, and computer sciences. On the 20th of May 2015 its Publisher – the Bulgarian Union of Electronics, Electrical Engineering and Telecommunications, CEEC, also celebrated 50 years since its founding.

The journal was established in a period of exponential growth of the electronics industry in Bulgaria and covered its progress during the golden decades of the Bulgarian electronics. For 50 years E+E has been publishing the most important achievements of the Bulgarian researchers. All these years it has been the place for presenting the scientific results and new developments created by thousands of electrical and electronic engineers. Due to the high motivation of the authors, reviewers and the Editorial Board, the journal succeeded in maintaining the very high standards of published research.

The journal E+E celebrates 50 years and successfully enters the age of maturity. Not only for the engineers, but also for any public institution, this is a fruitful age at which the knowledge, skills and experience (lifelong, social and professional) starts to give extensive and plentiful results. For over half a century several generations of entrepreneurial and motivated people have worked selflessly for the prosperity of the journal. As a consequence of their efforts the journal E+E is a publishing leader in the field of electrical engineering, electronics, telecommunications.

The Journal E+E is registered with ISSN 0861-4717 Print, eISSN 2603-5421 Online, and submitted to all major Bulgarian libraries, indexed by EBSCO, ROAD, Google Scholar, and at the RSCI.

Historic images from the past issues of the Journal are presented in the archive gallery.